I Will Surely Punish Perpetrators Of Kaduna Violence—Buhari 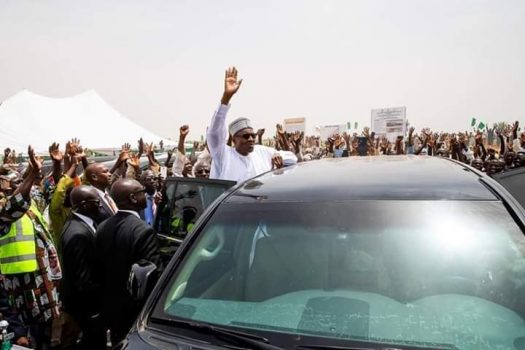 President Muhammadu Buhari on Tuesday vowed that the Federal Government will take the strongest measures possible to punish perpetrators of the latest violence that erupted in Kaduna State.

Speaking during a meeting with traditional and religious leaders in the state at the Indoor Sports Hall of the Murtala Square, Kaduna over the violence that rocked the state,  Buhari said those responsible for last week’s violence which  claimed many lives would not get away with the crime this time.

He assured that his government would consider the payment of compensation and resettlement of all communities that were affected by the 2011 post-election violence in the state.

His words: “The Federal Government will take strongest measures possible to punish perpetrators of these crimes. If, in the past they got awa, we shall now hold everyone of them to account for these latest killings.

“Let it be clear to all that individuals and communities have obligations to comply with the law and uphold peace.”

Such obligations he said, include respecting the rights of others to live wherever they choose and freedom to worship and pursue lawful livelihoods in any part of the country.

President Buhari expressed sadness over the loss of lives and property during the tragic incidents, stressing that it was unacceptable that criminal elements could unleash such mayhem on fellow citizens as recorded in the Kasuwan Magani incident of  October 18, 2018.

While commiserating with the government and people of Kaduna State over the loss of a traditional ruler, the Agom Adara, HRH Maiwada Raphael Galadima, who was killed by his abductors after collecting a ₦10 million ransom, Buhari assured that his government would continue to work towards ensuring that more security assets were procured and deployed across the country to protect all citizens.

“It is my earnest appeal to all who call Kaduna home to do their best to uphold peace in their respective communities. Chaos and anarchy tend to worsen and exacerbate whatever issues are agitating a community”, the President added.