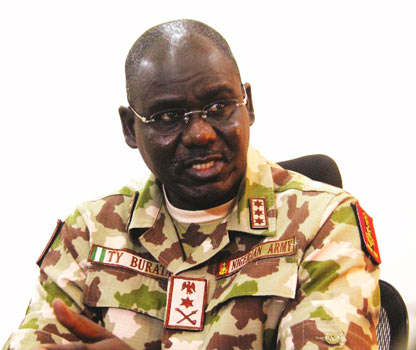 Nigeria’s Chief of Army Staff, Lt. Gen. Tukur Buratai has attributed the huge military losses in recent weeks to Boko Haram terrorists in the North-East to the use of drones and foreign fighters by the insurgents.

According to a statement released on Wednesday and signed by Brig. Gen. Sani Kukasheka on behalf of Buratai, the trend poses threats which required a review of military operations against the insurgents.

The statement read: “Since 2015, the Nigerian Army in conjunction with sister services and other security agencies have systematically degraded the capabilities and capacity of Boko Haram terrorists and many successes were achieved.

“However, in the last two to three months, we have noticed daring moves by the terrorists, increased use of drones against our defensive positions and infusion of foreign fighters in their ranks. These potent threats require us to continually review our operations.”

Buratai disclosed that 39 soldiers were killed and 43 others wounded in multiple attacks coordinated by the terrorists on various military locations in the past few weeks.

He said the insurgents attacked Kukawa, Ngoshe, Kareto, Gajiram and Metele military locations between Novemeber 2 and 18, adding that they were successfully repelled by the gallant troops and several insurgents killed.

“In recent weeks, Nigerian troops deployed in the North-East of Nigeria under Operation Lafiya Dole have come under series of attacks by large numbers of Boko Haram terrorists.

“Specifically; the Nigerian Army troops deployed at Kukawa, Ngoshe, Kareto and Gajiram came under attack at different times within a two-week period between November 2 and 17, 2018. Each of these incidents was successfully repelled and several members of the terrorists killed.

“However, a total of 16 personnel were killed in the course of these attacks while 12 soldiers wounded in action and are receiving treatment at our military medical facilities.

“As you are all aware, Nigeria is contributing troops to the Multi-National Joint Task Force (MNJTF) which has its headquarters in N’djamena, Chad. One of the Nigerian battalions; 157 Task Force Battalion deployed under the auspices of the MNJTF was attacked at their base on the outskirts of a town called Metele on November 18, 2018.

“During the attack, the troops were forced to withdraw and several casualties were recorded. As at date, 23 personnel were killed in action and 31 personnel wounded and have been evacuated to several medical hospitals within Borno State,” the statement added.

While sympathizing with the MNJTF, Buratai added that the necessary support would be rendered to the MNJTF to reverse the resurgence of the Boko Haram terrorists.

Buratai assured that the army will support the bereaved families of the deceased soldiers and continue to care for the wounded soldiers, who he wished speedy recovery.