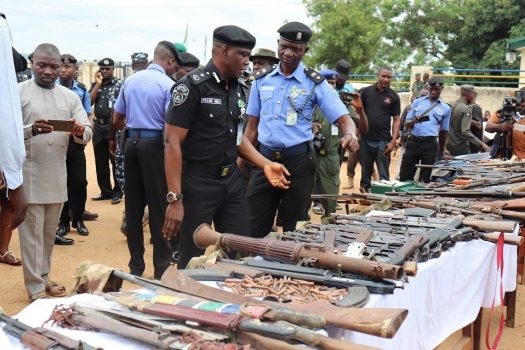 The Nigeria Police has disclosed that its operatives attached to ‘Operation Puff Adder’ have arrested 93 suspected kidnappers and armed bandits in the last two weeks during operations in Kaduna, Niger and Katsina states.

The Force spokesman, DCP Frank Mba who made the disclosure at Katari village along Kaduna-Abuja Highway in Kaduna stated that more than 500 ammunition were recovered from the suspects.

According to Mba, the arrests and seizures were part of the success story of ‘Operation Puff Adder’ which was launched to check banditry and other ills in the northern region and the nation at large.

He added that a comprehensive investigation had begun in a bid to track, intercept and disrupt all sources of arms supply as well as apprehended and bring their sponsors and collaborators to justice.

“The unrelenting and aggressive counter-kidnapping strategies of the police in the fight against kidnapping and other heinous crimes in the country have continued to yield positive results as police operatives attached to Operation Puff Adder recorded yet another harvest of criminal elements.

“A total of 93 kidnap suspects were arrested from different parts of the North-Central, North-Western and North-Eastern parts of the country. In addition, operatives of Operation Puff Adder recovered one rocket launcher, 35 AK47 rifles, 10 locally-made AK47 rifles and 500 live ammunition.

Mba however revealed that the operation was jointly carried out by operatives from Operation Puff Adder, the Special Anti-Robbery Squad (SARS) and other special forces.