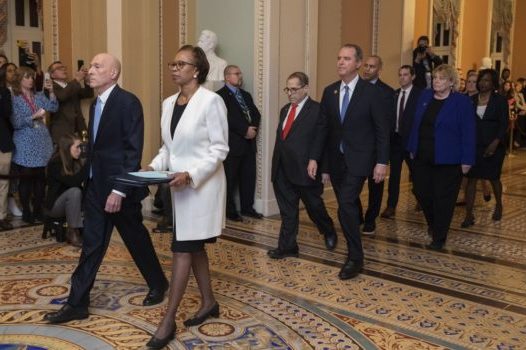 United States House of Representatives have passsed the formal articles of impeachment against President Donald Trump to the Senate, setting the stage for only the third trial to remove a president in American history.

Moments later, the prosecutors walked solemnly through the stately hall, filing into the Senate back row as the Clerk of the House announced the arrival: “The House has passed House Resolution 798, a resolution appointing and authorizing managers of the impeachment trial of Donald John Trump, president of United States.”

Senate Majority Leader, Mitch McConnell pledged to have the Senate “rise above the petty factionalism and factional fervor and serve the long-term, best interests of our nation.″ He called it “a difficult time for our country.”

Opening arguments are to begin next Tuesday after the Martin Luther King Jr. holiday.

Earlier Wednesday, the House voted 228-193, along party lines, to deliver the charges to the Senate.

The House impeached Trump last month alleging he abused his presidential power by pressuring Ukraine to investigate Democratic rival Joe Biden, using military aid to the country as a bargain. Trump was also charged with obstruction of Congress.