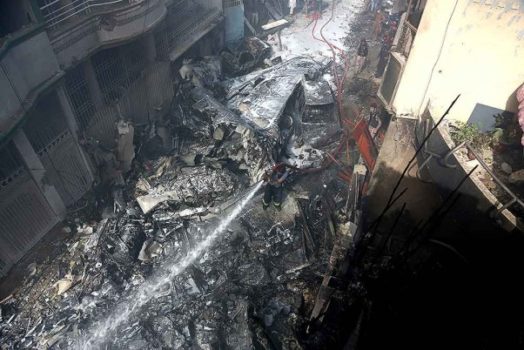 A Pakistan International Airlines Airbus A320 flying from Lahore has crashed in the densely populated Model Colony residential area of Karachi.

In an audio recording of the aircraft’s communication, the pilot can be heard speaking with air traffic control about his approach before saying, “We are proceeding direct, we have lost engines.”

Health officials in Sindh, the province where the plane crashed, said 37 bodies had so far been brought to the Jinnah and Civic hospitals. At least three passengers survived.

It is unknown whether the recovered bodies were passengers or residents.

The cause of the crash is yet to be confirmed. PIA Chief Executive, Air Vice Marshal Arshad Malik said the pilot had told traffic control that the plane was experiencing “technical difficulties”.

The disaster comes as Pakistanis across the country are preparing to celebrate the end of Ramadan and the beginning of Eid al-Fitr, with many travelling back to their homes in cities and villages.

Pakistan’s Prime Minister, Imran Khan said he was “shocked and saddened” by the crash.

“Prayers & condolences go to families of the deceased,” he wrote on Twitter.