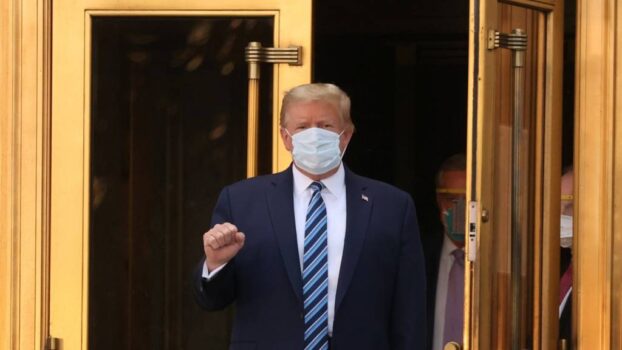 US President Donald Trump staged a dramatic return to the White House after leaving the military hospital where he was receiving treatment for COVID-19.

He immediately ignited a new controversy by declaring that despite his illness the nation should not fear the virus that has killed more than 210,000 Americans — and then he entered the White House without a protective mask. Before that, he had tweeeted:

I will be leaving the great Walter Reed Medical Center today at 6:30 P.M. Feeling really good! Don’t be afraid of Covid. Don’t let it dominate your life. We have developed, under the Trump Administration, some really great drugs & knowledge. I feel better than I did 20 years ago!

After a flight over Washington, Trump landed on the South Lawn and proceeded  to the first-floor balcony, where aides had positioned a row of American flags.

Then Trump posted a video after entering the White House saying: “We’re going back. We’re going back to work. We’re gonna be out front. As your leader I had to do that. I knew there’s danger to it but I had to do it,”
“I stood out front. I led. Nobody that’s a leader would not do what I did. I know there’s a risk, there’s a danger. That’s OK. And now I’m better, and maybe I’m immune? I don’t know. But don’t let it dominate your lives. Get out there, be careful.”
Recommended stories you may like: