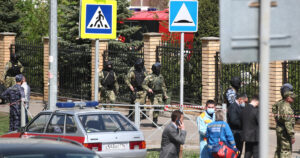 At least 11 people – including students – have been killed and several others injured in a shooting at a school in southwest Russia, according to reports

The shooting took place at Secondary School number 175 in the Russian city of Kazan, the RIA news agency reported on Tuesday, citing the emergency services ministry.

One teacher has been killed.

Another ten having been injured, a source in the emergencies services told TASS news agency.

Reports say two people opened fire and a 17-year-old boy is said to have been detained.

Footage posted on social media showed a large crowd outside the school after the premises had been evacuated, and emergency services including police and armed officers, as well as paramedics at the scene.

Dilyara Samigullina who was passing by the school building at the time of the incident, told the agency: “Several kids jumped out of the third-floor windows at some point, presumably in an effort to escape someone who was chasing them.”

Other videos showed broken windows with debris outside and emergency service vehicles parked outside the school, with people running towards the building.

Local officials said some children were evacuated from the school but others still remained in the building.

Other children are being evacuated via ladders provided by fire engines.

School shootings are relatively rare in Russia, but authorities have been on guard since a 2018 incident at a polytechnic college in Kerch, Crimea.