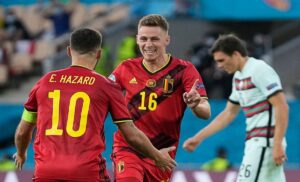 A stunning long-ranged strike from Thorgan Hazard settled a hotly-contested game between Belgium and Portugal, and qualified Belgium for the quarterfinals of Euro 2020.

Hazard, who plays for German side Borussia Dortmund, scored the winning goal in the 42nd minute with a swerving shot from outside the area that left Portugal goalkeeper Rui Patricio wrong-footed and late to swat the ball away.

Portugal had opportunities to draw itself level, with Raphaël Guerreiro striking the post and Ruben Dias forcing a good save from Thibaut Courtois in the second half.

However, it proved all in vain, as Belgium advanced to the quarterfinals where it will face Italy in Munich on Friday.

“In these kinds of games you have to grab your chances with both hands,” Hazard said afterwards.

“And voila, the goalkeeper expected me to choose the other corner, so the ball went in. I am happy I could score for my country!”

Belgium will next face Italy on Friday in Munich.

Ronaldo stayed one goal away from becoming the all-time men’s top scorer in international soccer. He is tied with former Iran striker Ali Daei at 109 goals.

Belgium played most of the second half without Kevin De Bruyne, who had to be substituted after being tackled from behind.