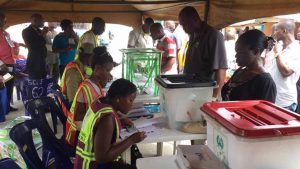 INEC projects that at least 20 million additional voters will be registered during the registration period which is expected to end in the third quarter of 2022.

“We are concerned about security difficulties in some sections of the country,” he stated. The commission intends to send 5346 personnel to 2673 registration centers. What happens if one of these employees is kidnapped?

“Our responsibility is to conduct credible election and also protect our staff. The security agencies are also facing challenges and there have been concerns that INEC officials might be target of criminals.”

He said the commission had also made robust provisions for Internally Displaced Persons who might have misplaced their Permanent Voter Cards due to insecurity.

Professor Yakubu also emphasized the need for massive advocacy and publicity to ensure that citizens are familiar with the new polling units ahead of the 2023 general elections.

“The success of the exercise depends to a considerable extent on citizens’ awareness through voter education. There will be new registrants, requests for intra-State and inter-State transfers as well as the replacement of voters’ cards as provided by law.

INEC added 56, 872 new polling stations around the country and granted accreditation to 31 organizations to monitor the CVR, with 20 additional applications pending.