France To Roll Out New COVID-19 Restrictions As Omicron Surges 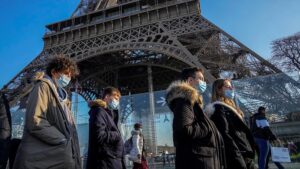 France has announced new COVID-19 measures in a bid to curb a surge in infections as concern rises worldwide over the rapid spread of the Omicron variant.

From January 3, working from home will be mandatory for at least three days per week for those who can do so, while public gatherings will be limited to 2,000 people indoors, and to 5,000 people for outdoor events, French Prime Minister Jean Castex said late on Monday.

The new rules will be in place for at least three weeks, Castex said, but there will be no curfew for New Year’s Eve and schools will reopen as planned in early January.

The moves came after France on Saturday recorded more than 100,000 COVID-19 infections in a single day for the first time since the pandemic erupted.

More than one in 100 people in the Paris region have tested positive in the past week, according to the capital’s regional health service. Most new infections were linked to Omicron, which government experts predict will become the dominant strain in France in the coming days.