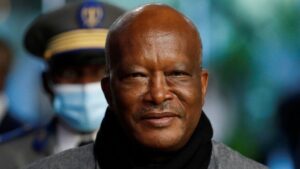 On Monday morning, armoured vehicles belonging to his presidential guard were seen covered in bullets and the seats soaked in blood, near the president’s residence.

Residents reported seeing a helicopter above Kaboré’s residence, following a day of gunfire and demonstrations, and the third coup in west Africa over the last year.

Two security sources and a West African diplomat told Reuters news agency that Kabore was detained at a military camp. There was no immediate comment by the government, which on Sunday had denied that a coup was under way.

“We just passed the military base where Kabore is alleged to be confined at the moment,” journalist Henry Wilkins reported from Ouagadougou on Monday.

“Traffic is circulating as normal but there is an unusually high number of military personnel out on the streets around the presidential palace.”

AFP news agency also reported the president had been arrested along with other government officials.

“President Kabore, the head of parliament, and the ministers are effectively in the hands of the soldiers” at the Sangoule Lamizana barracks in the capital, two security officials said.