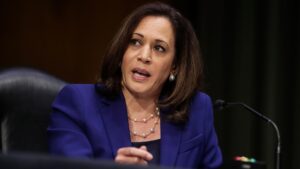 The Vice President of the United States, Kamala Harris, has tested positive for COVID-19.

This was announced on her official Twitter handle on Tuesday. The U.S VP tested positive for the virus despite being fully vaccinated and having received a booster shot in October 2021.

“Today, Vice President Harris tested positive for Covid-19 on rapid and PCR tests. She has exhibited no symptoms, will isolate and continue to work from the vice president’s residence,” said Harris’ press secretary, Kirsten Allen.

“She has not been a close contact to the president or first lady due to their respective recent travel schedules,” Allen said, adding that Harris would “return to the White House when she tests negative.”

Harris, 57, is the latest in a series of cases sweeping through the Washington elite, with multiple members of Congress also announcing positive tests on Tuesday.

The vice president’s husband, Doug Emhoff, came down with Covid in March, although Harris herself remained negative.