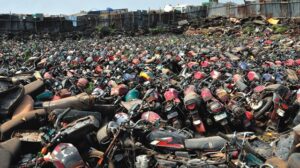 The Lagos State government has announced a “total ban” on the operations of commercial motorcycles popularly called okada in six local government areas of the state.

Governor Babajide Sanwo-Olu announced a directive to that effect while briefing the state’s security agents on Wednesday.

“After a critical review of our restriction on Okada activities in the first six local government areas where we restricted them on February 1, 2020, we have seen that the menace has not abated,” Sanwo-Olu said in the statement.

“We are now directing a total ban on Okada activities across the highways and bridges within these six local governments and their local council development areas, effective from June 1, 2022.”

He said the move will be extended to other areas of the state within a short while.

“This is a phased ban we are embarking on this period, and we expect that within the short while when this ban will be enforced, Okada riders in other places where their activities are yet to be banned can find something else to do,” he added.

The ban comes just days after some commercial motorcyclists lynched a sound engineer identified as David Imoh in the Lekki axis of Lagos State.

A misunderstanding over N100 balance of the fare charged by the Okada rider was said to have degenerated, resulting in some motorcyclists present at the scene joining their colleague to beat up David and two of his friends.

The commercial motorcyclists were said to have set the deceased ablaze after beating him unconscious.

Mr Benjamin Hundeyin, Lagos police spokesperson said four suspects have been arrested in connection with the murder of the sound engineer.