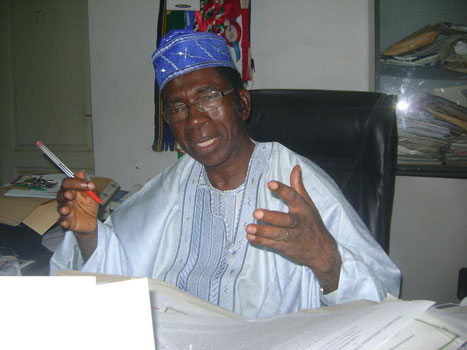 Former Minister of Finance and a founding member of the Peoples Democratic Party (PDP), Adamu Ciroma has thrown his weight behind the ambition of a former Minister of Education, Prof. Tunde Adeniran to become the National Chairman of the party.

He made the endorsement while speaking over the weekend when the Tunde Adeniran Campaign Organisation (TACO) paid him a courtesy visit in Abuja.

Ciroma said he had followed with keen interest, Adeniran’s professional career from inception especially during his days as a lecturer at the University of Ibadan and his tenure as the secretary of the defunct Mass Mobilization for Self Reliance, Social Justice and Economic Recovery (MAMSER).

Describing Adeniran as a man that could be trusted judging by his pedigree, track record of discipline, integrity and loyalty to the course of the PDP and the nation at large, the former Central Bank of Nigeria Governor tasked Adeniran and his team to uphold the principle of unity in diversity and promote oneness.

Ciroma said: “From what I see today, it is very clear that that the dream of the founding fathers of the PDP is very much alive and that means there is hope for our party and Nigeria as a whole.

He further disclosed that the result of the research and findings of the leaders of the party showed that Adeniran portrayed the transparency, discipline, dedication, experience and youth needed to rescue the PDP.