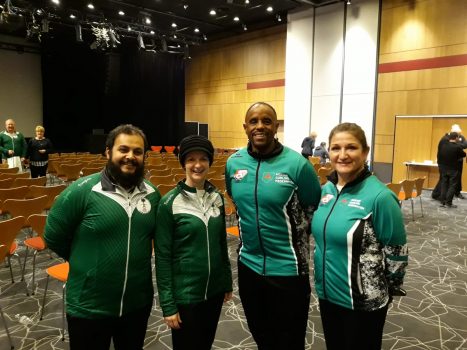 For the first time ever, an African country has won a curling game at a world championship.

As the French rock careened wide to end Thursday’s afternoon mixed doubles game, the Nigerian curlers quickly shook their opponents’ hands and then started jumping up and down in wild jubilation.

The couple, who began curling in Denver just three years ago now have their sights set on an Olympic berth.

When Tijani, whose family comes from the Nigerian city of Onitsha found out that there was an opportunity to compete on the world stage in a sport, he jumped at the opportunity to curl.

“Watching it on the Olympics over the years was motivating for me and my wife. We’re both athletes and competitors,” Tijani said.

‘What a great dream to share this with your best friend, my wife. You go through so many trials and tribulations. It’s been a long journey,” he added.

The two have been training relentlessly over the past year for the world championship and they so badly wanted to win at least one game for Nigeria. So when it happened, there was an outpouring of emotions.

The couple however agreed that there were a lot of frustrating times on the ice during the championship, including a 20-0 loss to the Czech Republic.

At the end of their on-ice celebration after their victory, Tijani and Susana then turned to the bench behind them to salute their Canadian coach, Ellery Robichaud.

“It’s as if I won the Brier. For them it’s quite an achievement. You saw how happy they were. I don’t see people win the Brier and be as happy as them. You get the feeling from there. The energy from them.

“It’s a reward for the headaches of coaching. It can be frustrating sometimes. The rewarding part of today was they got it. They placed the rocks. They put it together,” Robichaud said.