Match With North Korea Was Like A War – South Korean Players 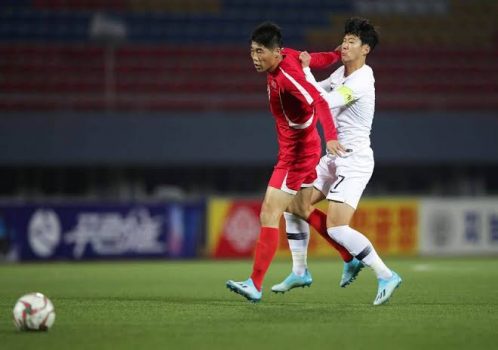 The qualifier which took place in the North’s capital, Pyongyang in a stadium with no fans from either country finished goalless. The encounter was only the second time South Korea’s men’s team had played in Pyongyang. The two countries are technically still at war and relations are at a low ebb.

“It was like war. North Koreans wouldn’t even make eye contact when I talked to them not to mention respond,” the Korea Football Association Vice-President, Choi Young-il told reporters as the team arrived back at Incheon airport on Thursday.

The captain of the South Korean squad, Tottenham of England’s Son Heung-min was also surprised by the North’s rough tactics.

“The match was very aggressive to a degree that I think it’s a huge achievement just to return safely without being injured. North Korean players were sensitive and aggressive. There was a lot of severe swearing,” Son said.

According to FIFA’s official report, there were two yellow cards for either side during the fierce encounter.

A video posted on Twitter by the Swedish ambassador to North Korea, Joachim Bergstrom who was one of the few spectators at the venue appeared to show a confrontation during the match.

“No fighting in front of the kids! Oh but there are none here today. Emotions run high at times as DPRK meets ROK in FIFA game but audience is sparse,” Bergstrom captioned the video.

Among the handful of spectators was FIFA President, Gianni Infantino who said he was disappointed and surprised by the absence of fans. No foreign media were allowed and the game was not broadcast live.

With no live broadcast or foreign media allowed, the North handed a DVD of the match to the South so it can eventually be shown on South Korean TV. However, the footage is apparently not good enough quality to be broadcast.

Although matches between the Koreas are not uncommon, most games were held either in the South or in a neutral country.

For example, in the 2010 World Cup qualifiers,  the North’s home games against the South were played in Shanghai, China.